From idea to owl - designing our second Scratch game

Few weeks ago we started designing our second Scratch game. We were outside walking home from the playground and we started discussing something about games and the conversation led to us deciding to build another game. I asked if she had any ideas for the game and it only took her a couple of seconds to come up with an idea for a game where an owl flies and catches mosquitoes. The level of detail that comes with her ideas is always very rich and I have to try and keep it simple so it's actually something we can accomplish with any decent amount of work.

I instantly started thinking it would be easy to implement such a game with a scrolling background, so I tried to explain the concept to her a little bit. But I sensed it was not going down that well so we talked about the details for the background graphics for a bit more before we were home.


We decided to draw the graphics on paper again. She started with the backgrounds (we needed two so we could make them scroll) and they came out really well. I decided to illustrate the background scrolling effect to her again, but this time show it by example. So we also made a "screen" by drawing a frame on paper and cutting out the middle with scissors. Then she held the frame little bit above the table surface and I moved the background drawings beneath it. I think she understood the concept this time and was excited about how it will look on the computer.

But first we needed to draw the owl. Or actually we also needed two owls, because even though I tried to keep things simple as I said above, she was adamant that the owl must first sit on a tree branch and only start flying after a button has been pressed.

She was a little nervous about whether the owl would come out good enough, so I suggested we look up some example pictures from the internet. We headed to Google image search and found some nice colourful owl pictures. She needed a bit of help to get the body shape right on the symmetrical sitting owl, but it came out amazing, much better than what I had expected. And then she drew the flying owl all by her self, without any help from me. That one also came out amazing and she was very pleased with herself and ran to show it to her mummy. 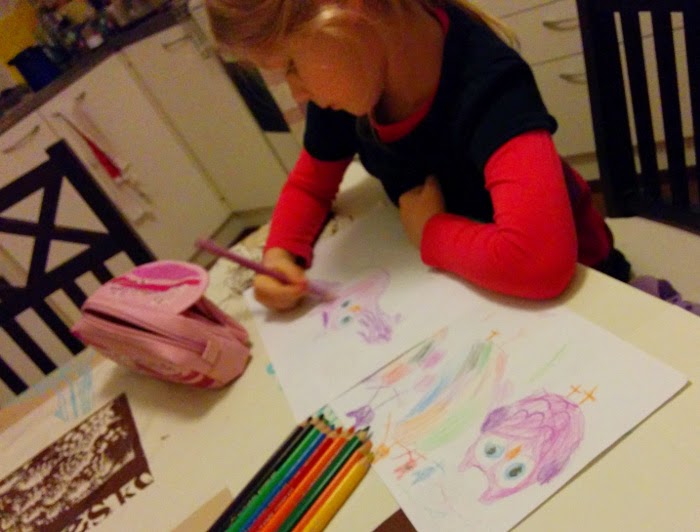 With the drawings done, she was already eager to start coding, but we didn't have time to start right away. I took pictures of the drawings and later processed them on an image editor. Nothing much, just stuff like cut out the owls and straighten the backgrounds and some small color corrections etc.

Next time we'll fire up Scratch and start with the actual coding. But all of the designing, preparing and modelling is also fun so we had really good time.
Posted by Unknown at 10:05 PM